The Female Fighters of Northern Thailand 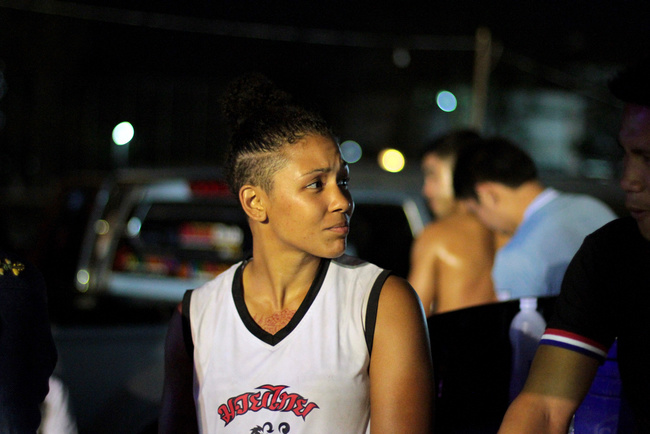 At the final bell of the fifth fight of the night, after the judges turn in their scores and a winner is declared, Thai gym owner Ood Hjalmarsson, who together with her Swedish husband Nik runs Santai Gym, walks up to the ropes with two envelopes full of cash. The Thai announcer declares to the crowd of local gamblers and foreign spectators that the first bonus envelope, stuffed with 20,000 baht (US $560), goes to the winner, Greek national Fani Peloumpi. The second bonus envelope, containing a respectable 10,000 baht, is awarded to Nong Am (alternatively spelled Nong Em), Fani’s hard-fighting Thai opponent.

The women receive their bonus envelopes graciously, bow to the crowd, and pose for photos outside the ring, making way for the main event between two high-level Thai fighters, both men. This year the annual Wat Santai Festival features seven matches, two of which showcase established female fighters. And in accordance with Santai’s interest in promoting top-level female fights, tonight’s only fight with a cash bonus is between women.

This might be novel for some promotions, but not Santai. The last few years’ worth of Santai festivals have traditionally featured top female fighters earning comparatively high purses. 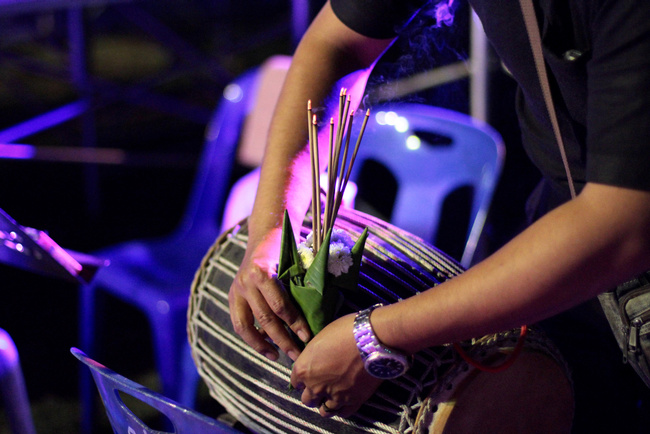 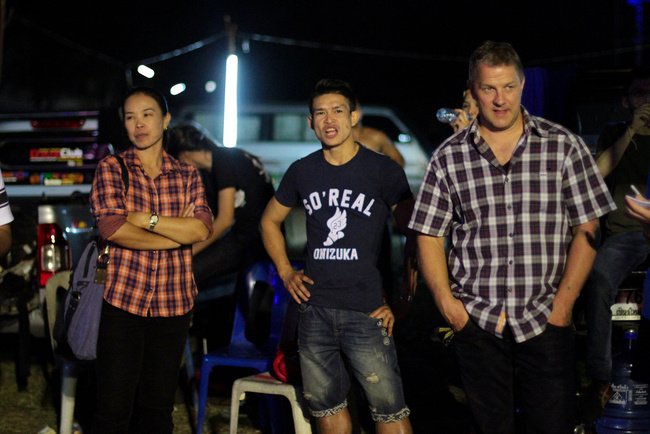 Wat Santai (Santai Temple) and the local village are the main backers for the fair and its fights. The whole community participates over the multi-day festival: vendors buy spots to set up shop; local citizens hand out free food and drink, part of the Buddhist belief in “making merit” by giving back.

Naturally, the fight event is organized by the adjacent Santai Gym, which contributed approximately 100,000 baht (US $2,800), funding fight purses and ring rental. It takes more than 100,000 baht to put on a mid-range fight event like this, though, and the rest of the costs are split between various small sponsors, like a Swedish burger company who advertises its Scandinavian fare on a large sign onstage. (The burgers were not available at the fair, sadly. According to Nik, Swedish owner of Santai Gym, his burger-making friends back in Sweden are sponsoring the fight “just for fun.”) 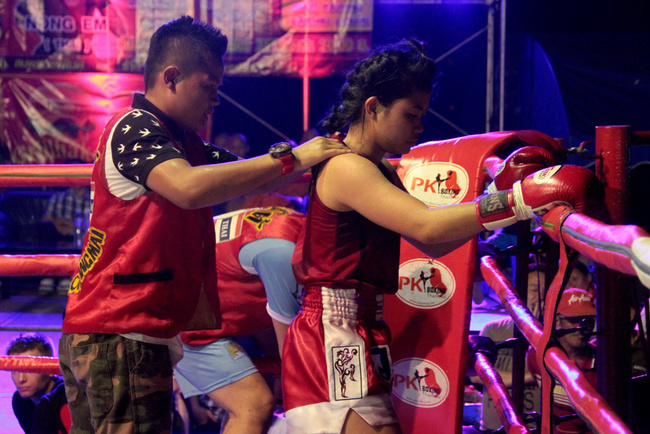 Competing tonight are 14 boxers, both Thai and foreign, from 13 to early thirties. There are requisite loudspeakers, an announcer, and some comfy couches on stage. In between rounds, ring card girls—literal girls—update the crowd with their numerical signs. “We had some Western women lined up to do this,” Nik says, “but they chickened out or something. So we got a couple kids. It’s better this way.”

The two girls, 10 and 11, sport baggy t-shirts tucked into Muay Thai shorts. Neither of them has ever been a ring card girl before, neither fights Muay Thai, neither is sure whether they’ll be compensated for their time, but both shyly agree this job is kind of fun. 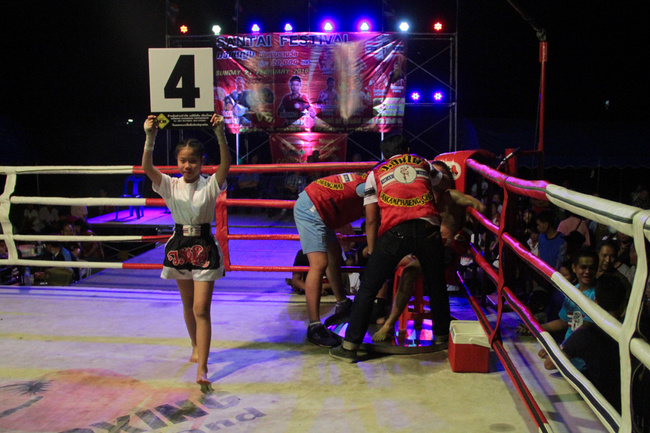 After female boxers Fani Peloumpi and Nong Am exit the ring, the main event gets underway. Santai’s own Diesel Lek, who followed his famous coach Thailand Pinsinchai here, takes on Ganggee Liangprasert. Bets are made, the crowd roars, and the VIPs on stage watch expectantly.

But if this is touted as tonight’s main event, then why were bonuses given only to the previous contenders, women?

Nik, who plays a large role in securing fighters for this event, says it has to do with availability, supply and demand, and the boxers’ relative skill level. “Fani and Nong Am are the best in the world,” Nik says. “These guys here [in the main event], they’re not the best in the world. They’re good, but you could see this kind of fight every weekend.” By contrast, matches between top women like Fani and Nong Am rarely happen, making their appearances all the more special. “They might fight like this once a year, at something like Angels,” Nik says.

Nik makes big statements about these women, but they have credentials to back it up. Fani Peloumpi has been immersed in Muay Thai half her life. The 31-year-old started training when she was 16, coming to Thailand for the first time in 2006 and staying long-term. She currently counts Sasiprapa as her home gym in Bangkok. Back in her native country, she is busy training the next generation of fighters. She, her sister, and her sister’s Thai husband own and operate the Athens-based Blue Dragon, a Muay Thai gym that boasts over 100 students. 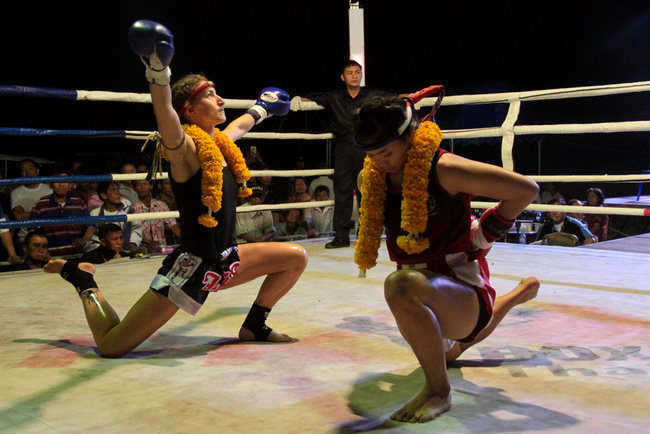 In the home-team red corner against her was Nong Am, only 18 years old but sturdy and strong, having trained Muay Thai since she was 11. Nong Am balances Muay Thai training with her university studies, riding up to Santai Gym most afternoons on her motorbike halfway through the session, hoping to get in a precious few hours of training before returning to schoolwork.

The women’s age disparity was considerable, a 13-year gap, but the fight was well matched. The engaged gamblers could clearly see Fani pulling ahead in the first rounds, a lead she maintained throughout. When the ref raised the Greek’s blue-gloved hand at the end, Santai owner Nik smiled wryly and conceded Fani was the stronger of the two.

“Fani was just too good,” he says. “Too strong for Nong Am right now.” But you have to remember, he reminds me, Fani is a gym owner, trainer, and fighter. Has been for a while. Her whole life is Muay Thai and it shows in her ring skills. Nong Am, on the other hand, is a solid fighter but also a full-time university student. Unlike many of her male counterparts, she hasn’t dropped out of school to pursue Muay Thai exclusively. 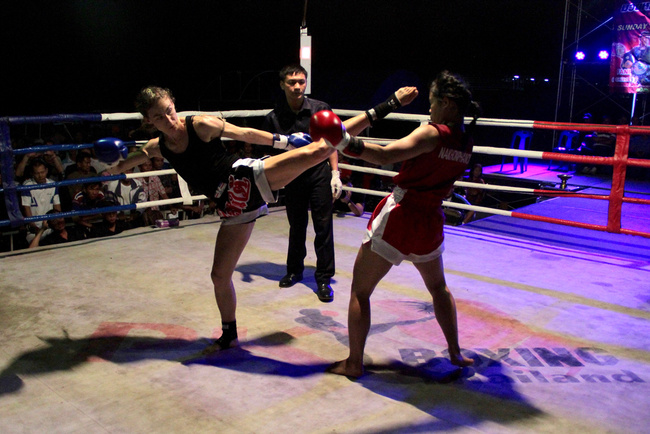 The other female fight of the night was between up-and-coming Canadian fighter Sophia “Cocopuff” Torkos and northern Thailand’s Hongthong Liangprasert. During the fight, a few old ladies behind me chattered to each other about how strong these foreign fighters are becoming. Cocopuff pushed Hongthong aggressively, backed her against the ropes and into corners. But it wasn’t enough for Cocopuff, who recently moved up a weight class. Ultimately, Hongthong was awarded the win amid cheers from blue corner’s Thai section. The gamblers promptly exchanged money.

Nik shook his head after the fight. “Cocopuff needs to get back down to 51 kilos,” he said, her earlier fighting weight. 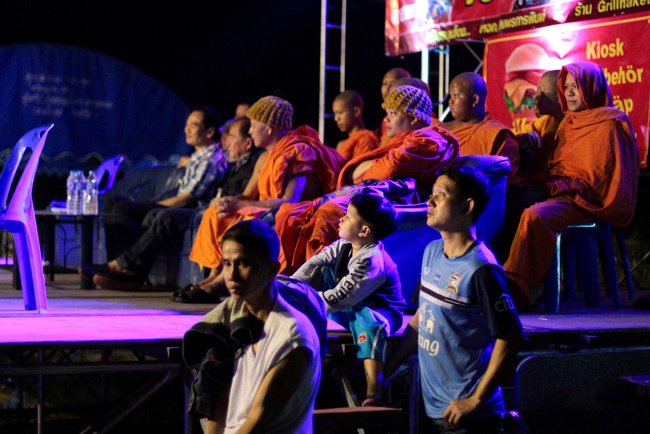 Only a couple more matches remained after the women left the stage. I was curious as to why Santai, which has access to many fighters representing an array of skill levels, from beginner to elite, chooses year after year to focus on high-level women. Nik’s first response is that, “Women are more interesting.” He likes watching female fights, he says. Likes the way they compete, their intensity. “The best women are in northern Thailand,” he adds. 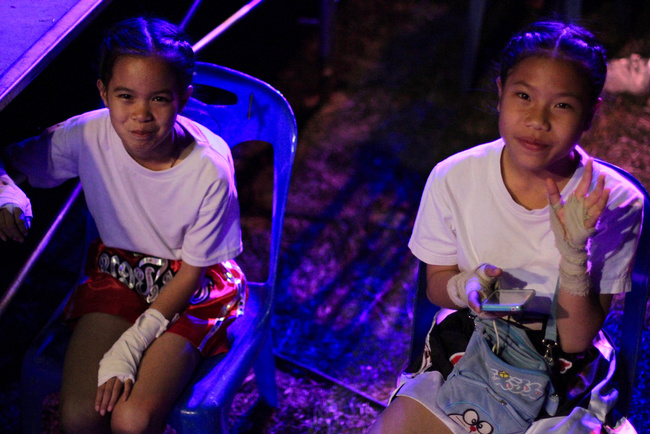 Another reason Nik mentions is the diversity found among top women as opposed to top men. “In Muay Thai, nearly all the best men are Thai, no foreigners. But now you have many foreign women fighting high levels alongside Thai women.” Nik reasons this might be due to the relatively recent phenomenon of women being allowed to compete. In Nik’s view, women’s Muay Thai is newer, so foreign women potentially have an easier time reaching the skill level of their Thai counterparts. “Also, many foreign women are able to train harder than Thais because most Thai women stay in school,” Nik adds.

His arguments make sense when viewed through tonight’s results, with career-fighter/trainer Fani Peloumpi securing a victory against university student Nong Am.

The men competing tonight are no jokes, though. Santai’s Louis Green from England wins handily against Rattananoi Por. Puiboonpuet, and Australian champion “Mini T” battles Singpayak Liangprasert until the latter collapses on the canvas, potentially having broken his foot kicking Mini T’s elbow. 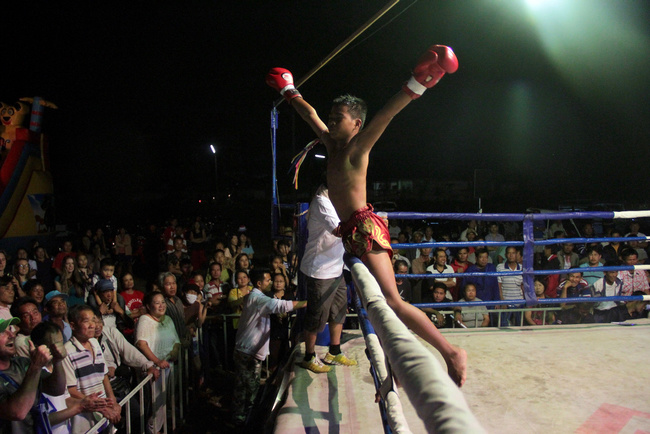 Gamblers, spectators, and fighters’ teammates filter out of the field after the final bell is rung. Santai fighters don’t have far to go to get back to the gym; it’s literally across the street beyond the temple walls.

Back at the gym, I run into Nong Am, cheerful despite her loss, as Thai fighters often are. With so many fights, potentially more than one hundred by the time they hit adulthood, there’s no such thing as a perfect record for Thailand’s serious fighters. Nong Am is a professional, and also a university student. She’s hanging out with her tall, quirky friend Saifa, also a Muay Thai-fighting college student, in Santai Gym’s parking lot. We chat about the fights for a few minutes before the two young women say goodnight and take off on their motorbikes. 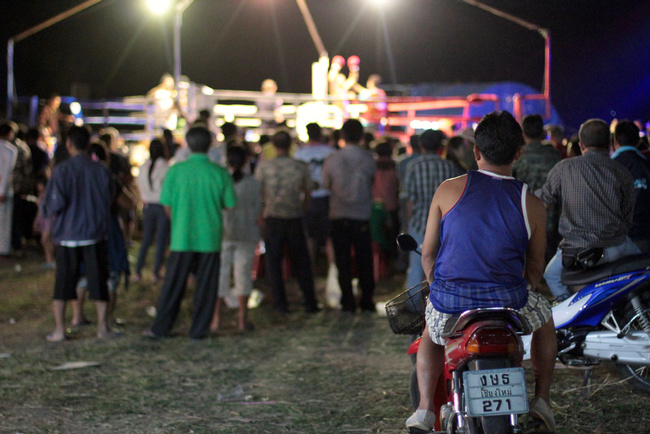 Check out these related stories:

Buakaw Banchamek and the Life of a Muay Thai Celebrity

High-Frequency Fighting and the Children of Muay Thai