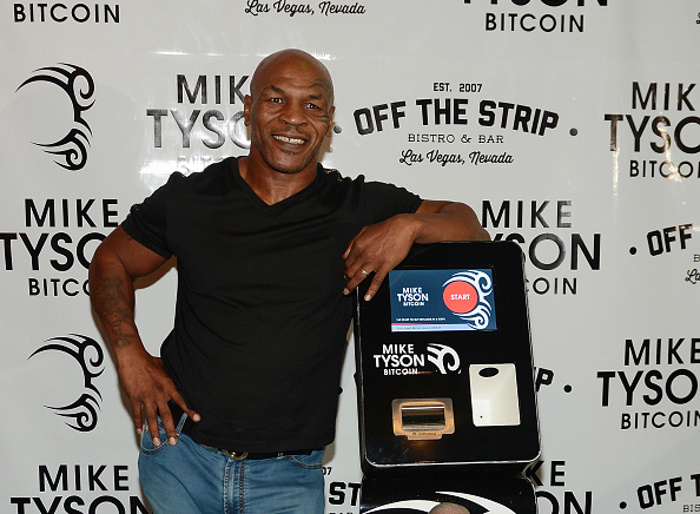 “The Mike Tyson Bitcoin ATM,” which promises to “Turn your cash into Bitcoin in under 20 seconds,” making the transaction a whopping 10 seconds faster than the boxer’s speediest knockout, made its official debut at the LINQ Hotel & Casino in Las Vegas on Thursday.

“I’m honored to join the bitcoin revolution with my very first bitcoin ATM,” Tyson said at the machine’s official launch.

This is just the beginning for Tyson and his partners at Bitcoin Direct (who are also, incidentally, the people behind the bitcoin ATM at One Kick’s Mixed Martial Arts Gym in Vegas). They plan to roll out 100 more machines, with profits split evenly between the company and the star, in the near future.

"Bitcoin Direct is extremely pleased to be partnering with Mike Tyson, the former undisputed heavyweight champion of the world, to help introduce and promote the use of digital currency by the general public.  Mike is a universally known boxer and celebrity whose fan base extends across a broad demographic. People around the world of all ages recognize him," Bitcoin Direct CEO Peter Klamka stated in a press release for the machine’s reveal. "The Mike Tyson Bitcoin ATM should help introduce bitcoin, the digital currency formerly seen as only used by the tech savvy, to the consumer and broaden its availability and appeal to the general public. The Mike Tyson Bitcoin ATM offers consumers a convenient, secure, reputable, automated and economical method of purchasing bitcoin for cash."

The Mike Tyson Bitcoin ATM brand was the cause of some controversy in the tech world when it was first announced this past July, with many suspecting that the fighter was getting sucked into a scam of some sort. Klamka insisted that wasn’t case.

Tyson, for his part, seemed comfortable with the arrangement. In July, he released the following statement via his spokeswoman: “"I'm very proud to be a part of the Bitcoin revolution. Digital currency is the future and the more I learn about it the more intrigued I become. Digital currency is going to level the playing ground for those that want alternatives for financial freedom. No one knows better than I how uncertain the economy can be and at this juncture in my life it is imperative that I am proactive about my financial planning and for me it includes Bitcoin.”

In a recent interview with the digital currency website CoinDesk, Tyson said that he was familiar with bitcoin before meeting with Klamka, and was intrigued by the alternative to traditional banking. “Options are a principal of democracy,” he told the site.

Although Tyson grasps the concept of decentralized digital currency about as much as the average Fightland writer (I landed this assignment based on little more than a Silicon Valley reference and my ability to name the location of two other bitcoin ATMs in Vegas), he’s excited about becoming the part he could play in its future.

“People don’t really understand a currency based on numerical equations. I personally still don’t... but I’m grateful to be a part of the revolution and hoping that my participation in this space will lend to more conversations and help increase knowledge and awareness,” he told CoinDesk. “In no way do I profess to be any kind of bitcoin currency guru. It just seems very interesting and I’m intrigued with the possibilities.”

Check out these related stories:

What 'Mike Tyson's Punch Out!!' Taught Us About Fighting

Mike Tyson: The Panic, the Slip, and the Counter