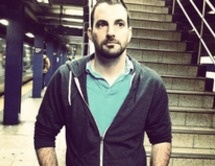 Josh was a freelance writer in Austin, Texas, working for 'The Austin Chronicle' and 'The Texas Observer.' He started writing about mixed martial arts for 'VICE' in early 2012.