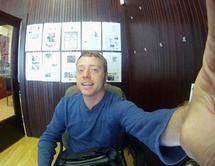 Charles Russo is a journalist in San Francisco. He misses playing shortstop but enjoys losing to his kids at Warhammer 40K. He is (inexplicably) a former member of the Bush administration. His new book is Striking Distance: Bruce Lee and the Dawn of Martial Arts in America.